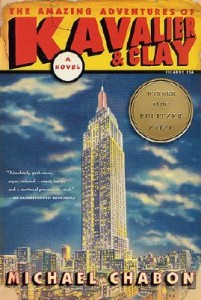 The Amazing Adventures of Kavalier & Clay by Michael Chabon

I listened to the unabridged audio version of The Amazing Adventures of Kavalier and Clay—mostly in the car but sometimes at the gym. I haven’t been going to the gym much lately, so it took a really long time to get through the book, which is 500 pages but feels longer. I liked it very much. I knew before I started it that it was about comic book creators, but I didn’t realize what its underlying themes were. The largest of those themes is escape—Joseph Kavalier’s escape from the Nazis, his escape from the gloom of the war and his family’s death, his escape from Antarctica, and Sammy’s escape from the lie he lives. And of course there is the comic book character they create: The Escapist, a figure inspired by Joe’s training as a magician and escape artist in his native Prague.

The theme underlies the story, which is a bit rambling but never veers off course. Joe arrives from Prague in 1939 and lives with Sammy and his mother in New York. Sammy, whose father had been in vaudeville, works in a novelty company but aspires to draw comic books. Joe is an artist who needs work, so their collaboration is instant and almost immediately the invent The Escapist and their comics are a hit. Joe meets Rosa and life seems good, but then the war rears its head. Joe joins the Navy and disappears and in his absence life gets very complicated for Sammy and Rosa.

Although a lot happens to Sammy and Joe, and they each have their adventures, together and separately, there isn’t really a single plot. What makes the book work is the change we see in Joe and Sammy, a steady change over the course of twelve years.

The book was a deserving winner of the Pulitzer Prize. It’s very impressive.