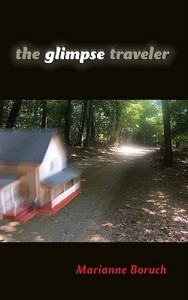 The Glimpse Traveler (Break Away Books) by Marianne Boruch

I read this travel memoir a couple of months ago (hence the “2015 Reading” label) and thoroughly enjoyed it. The structure is simple. In the late ’60s, Marianne Boruch left Illinois with a couple of friends for Spring Break, with the notion of hitchhiking to California. The husband of Boruch’s female friend had recently died, and so the trip became something of a spiritual quest, looking for clues about him.

That quest led the two women–the guy went his separate way on the West Coast–to Esalen, a commune, a cult-ish group north of San Francisco, and some Yuppie friends of the husband who lived in the city. The trip is something of a collage of the period, and it’s amazing they were able to do so much (for so little money) during that one break from school.

Marianne Boruch is now an established poet (she teaches at Purdue) whom I met in October at the Indiana Authors celebrations, where she won the National Authors Award. Here is a brief video interview with her: