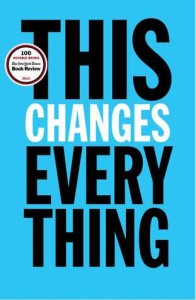 This Changes Everything: Capitalism vs. The Climate by Naomi Klein

I understand that climate change is real; I accept that human activity is responsible; and I believe we should be doing everything we can to stop churning harmful emissions into the atmosphere. And yet this book, which is subtitled “Capitalism vs. the Climate,” actually made me question these beliefs. To put it simply, Klein has made her argument in such a way–with not even a nod toward rhetorical balance–that it becomes difficult to believe many of the assertions she makes.

The solution to the coming catastrophe that is climate change, she is saying, is to blow up the world as we know it, to end the global economic systems of trade and finance, to put an immediate end to the extraction and consumption of fossil fuels, to saddle corporations and the wealthy with the enormous cost of accomplishing these tasks, and while we’re at it, they should also be paying reparations to poor countries and indigenous peoples and the descendants of slaves, none of whom are responsible for putting us in the position we’re in. Even if she’s right–and her arguments aren’t, to me, compelling–she’s obviously hallucinating. None of that is going to happen, not even if the seas rise a foot, the glaciers all melt, and weather systems go even more berserk than they have already.

She begins the book by attacking trade and, especially, the free trade agreements that have been put in place, beginning with NAFTA. She may be right that these trade agreements are in conflict with the goals of other, later, agreements that seek to address climate change. But in my opinion she is not right that increased trade is necessarily the culprit. Trade agreements probably need to be reformed so that they take environmental and social impacts more into account, but they are not inherently bad.

And near the end of the book, she brings in the oddly inapplicable story of her own fertility history, and concludes, illogically, that she was able to conceive and carry her baby to term (despite a history of miscarriages) because she visited a naturopathic doctor. Never mind that women have had problems with miscarriages since forever and that there is no proof that any of the steps she took resulted in her successful pregnancy. She might as well have concluded that vaccines cause autism. (Indeed, I looked in the index to see if she might have addressed that topic as well.)

The bottom line: I know climate change is a serious problem, but this book (a) did not persuade me of that fact; and (b) did not point to a practical solution to that problem.

1 thought on “2015 Reading: This Changes Everything by Naomi Klein”