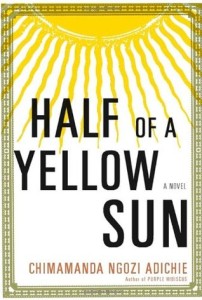 Half of a Yellow Sun

This stunning novel was published in 20o5, and somewhere along the way I acquired a signed first edition, but I didn’t get around to reading it until now. I’m glad I didn’t wait any longer. (And, in truth, I read it because I nominated it for my Reading Liberally book club to tackle for this month.)

I think most Americans were only aware of the Nigerian Civil War (also known as the Biafran War) because of various humanitarian aid efforts undertaken to relieve the horrible famine in Biafra that ultimately killed 2 million people. We were distracted at the time by the Vietnam War, but it is still unforgivable that we were so ignorant of what was happening.

The novel tells the story of two privileged sisters, daughters of a wealthy Igbo man. One is involved in the family business, and the other, who falls in love with a “revolutionary” academic, teaches with him at the university in Nsukka, in the territory that will become Biafra (populated mostly by Igbo people). The business-oriented daughter falls in love with a British writer who is enchanted by Igbo culture and tries to make it his own. The other sister and her lover are joined in their household by a young villager who becomes their houseboy. All of these people struggle through the war, displaced from city to village, their situations becoming more and more dire as they witness atrocity after atrocity.

A little slow to take off, this soon develops into a thrilling and deeply disturbing plot. Even more effective, though, is the portrayal of the characters, especially the three rotating narrators. We start with Ugwu, the village boy who comes to work for Odenigbo, the revolutionary, and Olanna, the industrialist’s daughter who is his lover. We then get Olanna’s point of view and meet her sister. And finally we have the point of view of Richard Churchill who has come to Nigeria to study and write about Igbo art. These are some of the best-drawn characters in modern literature. The reader truly gets a feel for who these people are as they encounter their country’s terrible suffering. But as horrible as the story seems, the reader gets the feeling that reality was even worse.

While rotating the narrative among Ugwu, Olanna, and Richard worked well, Adichie made one structural choice that still puzzles me. The book has four parts. The first is “The Early Sixties” in which the characters are introduced and the setting and conflicts established. The second part is “The Late Sixties,” jumping ahead to when the war is underway. We have hints in this section about plot points that the reader won’t fully understand, but these are clarified in the third part, in which we jump back to “The Early Sixties.” For the fourth part we return to the war and “The Late Sixties” and the resolution of the novel. I suppose the reasoning for this chronology shift is to have a bit of mystery–what caused this tension between Richard and Odenigbo, for example–but the mystery is so secondary to the greater story that I think a straightforward chronology would have been just as effective.

I’m very glad I finally got around to reading the book. I know I am ignorant about most of Africa, but reading this was a good start to a greater understanding. And I’m now looking forward to reading more of Adichie’s work.