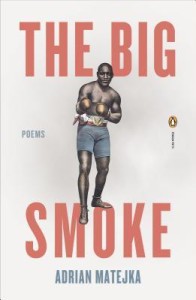 The Big Smoke  by Adrian Matejka

A finalist for both the Pulitzer Prize and the National Book Award, this powerful poetry collection examines the life of Heavyweight Champion Jack Johnson, the first African American to achieve that title. The poems are persona poems, mostly in the voice of Johnson, some in free verse, some blank, and some that read like prose poems (but usually with line breaks).

Shadow boxing plays an important role in the poems, and shadows appear frequently. In “Shadow Boxing” (one of four poems in the book with that title), Johnson says, speaking to the shadow:

And in three other poems, all titled “The Shadow Knows,” Johnson’s shadow speaks back:

You’re not fooling me
by quoting Shakespeare,
Mr. Champion of the Negro
World. No matter how
carefully you enunciate,
Tiny was a slave
& the condition of the son
follows the condition
of the mother.

Other poems are in the voices of several of the women in Johnson’s life and reveal Johnson not just as a boxer but as a smart but violent man.

Most importantly, Johnson was a trailblazer, breaking down the color-barrier in his sport. It’s a fascinating study of an important figure in both 20th Century American athletics and race relations, and a compelling reading experience.

I had the pleasure of spending some time with Matejka at the Indiana Author Awards last October where he received the Regional Author Award.

Check out this interview with him conducted after the award ceremony: