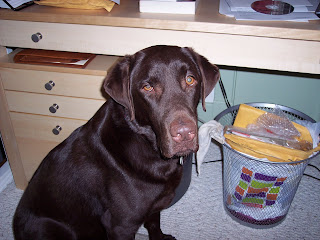 Bhikku is doing pretty well, considering what he’s been through. (See Pet Worries.) He’s made steady progress and his appetite has been good ever since he got home. (He’s not completely regular in some of his other . . . habits . . . but the vet isn’t too worried about that yet, so neither am I. She prescribed yogurt.)

On Tuesday we went in to the local vet’s office for blood work, which revealed that his bilirubin levels have come down further (originally “off the charts”–over 35–they had fallen to 16 after surgery and 6 on the day he was released), but still aren’t at normal levels. His eyes and skin are sill a little yellow, but nothing like they were. And he just seems happier; he certainly enjoyed all the attention he got from the vet and the technicians, who called him their “miracle dog”–reinforcing for me just how close he came to dying.

The bland diet continues, along with a host of pills — antiobiotics, pain meds, antacids. We did learn that the biopsy was negative, so that’s good, and we’re using the right antiobiotics to fight the liver infection, so that’s good, too. Soon he can start going back gradually to his regular food (if he will — he might insist on white chicken meat from now on), and next week we’ll do the blood tests again AND get the staples removed. (I hope no one invites me to watch while that’s done.)