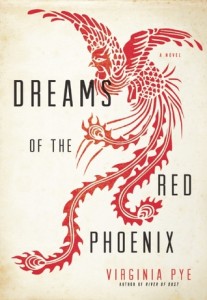 Dreams of the Red Phoenix by Virginia Pye.
Unbridled Books, 2015

My friend Virginia Pye’s first published novel, River of Dust, centered on a group of American missionaries in China shortly after the Boxer Rebellion. Her new book is about missionaries in China under Japanese occupation, at the time when Communist and Nationalist forces build a fragile alliance to combat the invaders.

Given the atrocities committed against the local population, it’s not hard to imagine some of the missionaries siding with the Communists and even finding ways to help them, and that’s the source of the conflict here. Shirley, a missionary wife, uses her nursing skills to treat wounded Chinese after clashes with the Japanese occupiers, which doesn’t sit well with them, creating trouble for everyone, including Shirley’s teenage son, Charles.

While the book doesn’t delve too deeply into Chinese culture or society, the reader will be compelled to turn the page by the suspense created by the hard choices facing Shirley. Interestingly, the novel is inspired by the author’s grandmother’s life in China before WWII.