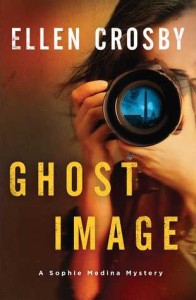 I had heard of Ellen Crosby’s Wine Country Mysteries (The Merlot Murders, The Chardonnay Charade, etc.) but had not read her books until I picked up this book, which is #2 in Crosby’s new series about photographer Sophie Medina. I’m not a big fan of the mystery genre–there are so many rewarding literary novels and short story collections being published that I feel guilty if I read anything else–but I admit that they can be entertaining. This one certainly was.

What is appealing here, at least to me, is the setting–Washington DC, Central Virginia (Middleburg and Charlottesville), and a bit of London–plus the unusual subject matter: intrigue concerning the possible discovery of seeds received by Thomas Jefferson from the Lewis & Clark expedition and potentially holding the secret of a treatment for Alzheimer’s Disease. Sophie Medina, a freelance photographer married to a former CIA agent (of course!), finds herself at the center of the mystery, and along the way learns a lot about seeds, the Franciscans, Pierre L’Enfant, and political shenanigans.

Apart from the fact that it involves a murder or two, it’s a fun read.