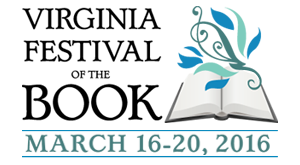 This week, starting on Wednesday, you might see me dashing around Charlottesville, Virginia, heading to another literary event at the Virginia Festival of the Book. When I’m not moderating panels (see below for details), I’ll be attending readings and discussions at various venues around the city. I might find time to stop for coffee or a glass of wine with some writing buddies, too.

As for the panels I’m moderating, I think those will be fun. The first one is Life After Death: Hello from the Other Side.  The title is a little misleading, as only one of the novels we’ll hear about, Sharon Guskin’s The Forgetting Time, deals with reincarnation. Andy Kutler’s book, The Other Side of Life, is about a man who is given a second chance and emerges from a coma–but in another place and time. The third book, Jacquelyn Mitchard’s Two if By Sea, is about brothers endowed with supernatural abilities, but doesn’t have anything to do with life after death. In any event, I’m looking forward to meeting Sharon, Andy, and Jackie, and hearing them talk about their books. (4pm, Wednesday, 3/16, Barnes & Noble)

The second panel I’m moderating involves literary thrillers: Pirates, Drones, and Other Catastrophes: Thrilling Fiction. This panel involves just two authors because the third, unfortunately, had to cancel. So we won’t hear about the “other catastrophes”–a murder during Hurricane Katrina in New Orleans in Elise Blackwell’s The Lower Quarter. But two other authors will be on hand to talk about their books: Corban Addison’s The Tears of Dark Water is about a couple of Americans captured by Somali pirates, and Ron Childress’s And West is West is about both currency trading and drone strikes. Both books raise serious ethical questions while weaving gripping stories. Should be a great discussion. (4pm, Friday, 3/18, JMRL Central Library)

Hope to see you in Charlottesville!