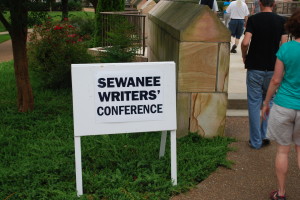 We only have a couple of days left to this year’s edition of the Sewanee Writers’ Conference, so let me get caught up in the happenings here.

Sunday afternoon began with readings by three fellows: poet Rebecca Hazelton, playwright Lina Patel, and novelist Jamie Quatro. That was followed by a craft talk by Diane Johnson, entitled “What are we doing here?” It was a fun talk that took a serious look at some of the principles of creative writing that seem always to come under closer examination but never actually change.

Then we had a reading by poet Maurice Manning followed by the annual book-signing party at the bookstore. Because I already had the books of most of the faculty members, I mostly picked up books by fellows and got them signed, and found myself signing copies of my own book. The evening reading was by Steve Yarbrough.

Monday morning kicked off with a staff reading. We heard from Amy Arthur, Hastings Hensel, and Jake Ricafrente, all poets. I skipped the editors’ panel that followed, but came back for Tim O’Brien’s craft lecture. Tim’s talk might have been titled “Trouble, Truth, and Relativism” (I don’t remember if he mentioned a title) and he touched on topics that both Dick Bausch and Diane Johnson had also covered–in his own, wonderful way. He reminds me that what good fiction does is seek the Truth.

Poet Daniel Anderson gave the afternoon reading and the evening reading was by Christine Schutt. As a fiction writer, I was especially enthralled by Christine’s reading. Near the end of the story there is a surprising moment that caused the audience to gasp audibly, much to Christine’s delight. Great story, great reading.

On Tuesday morning we had more staff readings: Isabel Galbraith, Jonathan Heinen (one of the few fiction writers on staff), and Melissa Range. Then there was an editors’ panel with Leigh Anne Couch (Sewanee Review), David Lynn (Kenyon Review), Robert Wilson (The American Scholar), and Don Share (Poetry). The biggest news here? Poetry’s app. When Don mentioned it I downloaded it to my tablet. Very cool.

Wyatt Prunty then gave a craft talk on Randall Jerrell. In the afternoon we heard a reading by Elizabeth Spencer who, at 92, is still going strong and has a new book coming out. After that we had a reception at the University’s Archives and had a chance to look at some of the fascinating items in their collection. The evening’s reading was by A.E. Stallings, who does a lot of translations from Greek in addition to her own poems. She read a mix and was very entertaining.