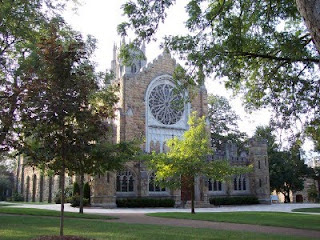 Sundays at the Sewanee Writers’ Conference begin slowly. I got up a little later than usual–after the Saturday night Pub dance–and took a long walk. Breakfast was later by an hour. And nothing else was scheduled until 11:00 when Richard Bausch gave a craft lecture. His primary topic was the Art of Exposition in which he elaborated on the concept that the rule of creative writing that we’ve all heard should not be “show, don’t tell,” but “show AND tell” because it is crucial to include exposition in fiction. (I recalled advice I heard years ago from Grace Paley along the same lines.) He also read his essay from this summer’s Atlantic Fiction Issue: How to Write in 700 Easy Lessons.

The next event, after lunch, was the second Fellows reading. First up was the delightful poet Beth Bachmann, who read from her book Temper. I was up next, and I swear we didn’t coordinate, but Beth’s last poem, “Elegy” makes mention of both a nymph and a fawn, and I read my from my story “The Nymph and the Woodsman” (from the book In an Uncharted Country) in which a deer is featured prominently. I enjoyed reading in front of this amazing audience. Then Jim Murphy read from Heaven Overland and Jillian Weise read from her novel Colony–two great readings. We really do have a talented bunch of fellows.

Ben Howard read his poetry a little later in the afternoon–I enjoyed and was surprised by the Zen influences there–and then we all shifted to the bookstore for the book signing party.

In the evening we listened to Padgett Powell read from The Interrogative Mood, one of the most unusual books I’ve ever read.

That was enough for me–a long day!