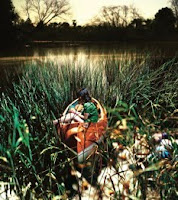 Why is this author called “T. Coraghessan Boyle” in The New Yorker, but “T.C. Boyle” everywhere else? (He also has a story in this month’s Harper’s, where the shorter version of the name is used; I’ll be commenting on that story tomorrow.) And why do we have to keep reading his stories in The New Yorker? It’s not that this is an awful story. In fact, there are some things about it that I like a lot. But mostly it’s boring and, if not quite predictable, predictably unsatisfying.

The story is primarily from Miriam’s perspective. It’s the seventies before Nixon’s resignation and Miriam lives with her husband Sid and daughter Susan in the Colony at Kitchawank, a nice lakeside community where they socialize frequently with their neighbors. There are also two adult sons, but their virtually invisible in the story. Miriam’s good friend Marsha is married to David, and they have a daughter Seldy. Seldy takes up with the neighborhood bad boy, Richie, and over time the neighborhood crumbles around the edge, as does Miriam’s closeness to Marsha. In the end, someone dies—you get that from the title, so that’s no spoiler—and I’m not sure the story succeeds in making the reader care. In fact, it seems to me that Miriam has never cared all that much, and that’s her attitude at the end: “She knows it will all be lost, everything we make, everything we love, everything we are.” That bleak conclusion is softened somewhat by a pleasant memory Miriam has of her young daughter back during a carefree time.

In fact, I like this aspect of the ending – that it seems to go in two different directions at once. But because I never really felt the tension of the story, this ending isn’t satisfying.

What I liked most about the story, though, is the interjection of the second voice in seven places through the narrative—in brackets, in smaller type. It is the voice of “T.” who is a friend Lester, one of Miriam’s sons, and also, of course, that of T.C. Boyle. It’s an interesting touch and I found myself looking forward to these interjections more than I did the actual story. Which doesn’t say much for the story, I’m afraid.