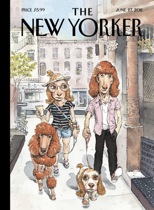 June 27, 2011: “Gravel” by Alice Munro
But what happened to Blitzee?
As I was reading this wonderful Alice Munro story (available for free, so read it quick before they change their minds!), I wondered why the narrator had such a poor memory of this period of her life. She was five, true, but still. And then the facts are revealed. How her holder Caro sister had acted out already—a protest, in a sense, over the destruction of the family—and so Caro’s behavior on the day in question was not a huge surprise.
The girls’ mother fancies herself a Bohemian, hangs out with actors at the local summer theater, and eventually leaves their father for Neal, who, she says, has made her pregnant. Even though it’s the mother who has caused the problem, she retains custody and takes the girls to a trailer to live with Neal. It’s out in the country and has various dangers, but the mother isn’t a very attentive caretaker. Which is not to say she doesn’t love the girls. She does, and she watches out for them. Until one day . . .
But what happened exactly. She doesn’t remember. I don’t blame her.
A very good story.

2 thoughts on “>The New Yorker: "Gravel" by Alice Munro”