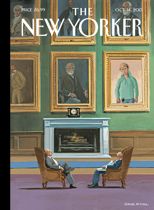 I don’t see a Q&A with the author, so it looks like we’re on our own. However, the story is available to read for free, so there’s that.

I don’t hate the story. I don’t love it either. It tries to pull off an Alice Munro stretch of time at the end, and I think only Alice Munro can get away with that.

This story is about two young girls in the Soviet Union. They bond at a time when there is a shortage of both bananas and fathers—Katya’s father is dead, Tania’s father is said to have defected to America—but they both have their dolls and fantasy lives. As children, Katya is somewhat better off than Tania. But, predictably, they fight over a father doll and Katya blurts out what she thinks is the truth about Tania’s father. The girls lose touch and go separate ways. That’s most of the story, but then we fast forward.

Both girls are now grown and, as it happens, have found their way to America. (They reconnect via Facebook.) Tania came to the US to reunite with her father. Katya came with her husband, whom she is now divorcing. The girls’ fortunes are reversed, and Tania seems intent on demonstrating that to Katya. Which is okay, but then Katya catches a glimpse of Tania’s husband, who resembles her father-figure doll from when they were girls.

The ending, for me, is forced and unlikely.

2 thoughts on “The New Yorker: “Katania” by Lara Vapnyar”