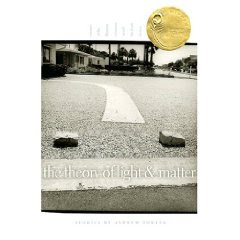 I have just finished reading The Theory of Light and Matter by Andrew Porter, winner of last year’s Flannery O’Connor Award for short fiction, and coincidentally today I received notice form the University of Georgia Press that my manuscript did NOT win the award this year. Let us not dwell on the sting of my rejection, however, and instead let us praise Porter’s fine story collection.

I have mentioned this writer before, when his story “Azul” (which is included in this book) was published in One Story. Many of the stories here are about a young man looking back at events in his childhood (“Hole” is a good example), or about a young man reflecting on his place in his broken family (“Coyotes,” “River Dog,” “Storms,” “Connecticut”). A significant exception to this pattern is the title story, “The Theory of Light and Matter,” which is told from a woman’s point of view. She is married to her college boyfriend, but recalls her relationship with her physics teacher, a relationship that nearly ruined her engagement.

Perhaps my favorite story in the collection is “Departure”—not surprising since the story won a 2008 Pushcart Prize. It involves two young Pennsylvania high school boys who “date” Amish girls who are allowed to get brief glimpses of the outside world. The boys are also outsiders in their “English” world, which is one reason why they are drawn to the girls, but it makes it all the more difficult when they are forced by circumstances to separate.

It’s a fine collection and a rewarding read.