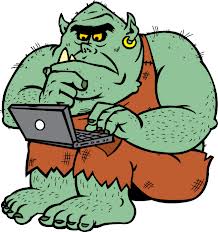 When I was a kid, my family every summer went to a Minnesota lake because my father enjoyed fishing. Every day we went trolling for bass and pike . . .

Oh. Not that kind of trolling?

INTERNET trolling is a whole other thing. Why do people do it?

Last night, someone posted a comment on this blog in response to my very brief post about the recent Robert Coover story in The New Yorker. I didn’t think much of the story, so I didn’t have much to say about it. The commenter, though, in classic troll mode, said my reading of the story was obtuse and that I was an ignoramus. Really? That’s an appropriate comment in a public forum? I could have deleted the comment, but I let it go and asked the troll to do better. (I’ve checked around the Internet, and I’m finding anyone saying anything particularly brilliant about the Coover story, but maybe Mr. Troll will have something to offer.)

Then, this morning, in a forum I participate in some times, a friend posted that he had been criticized online for his use of the past perfect tense in an Amazon.com review. What kind of a troll does that? (I looked at the usage and it looks right to me, even after referring to a couple of usage texts.) I Google this particular troll and harping on the use of the past perfect appears to be his thing. I guess everyone needs a hobby, but he should probably try bowling.

I’ve also been following an online discussion in my local newspaper. In response to a letter to the editor, one local curmudgeon made the argument that the Civil War was about “States’ Rights.” Another commenter, though, made the stronger argument that it was about slavery. The former, a familiar troll in that forum, quickly lost his cool and began with ad hominem attacks (go back where you came from, you’re ignorant, etc.) but the latter has kept his cool and stuck to the facts. (The only thing I contributed to the argument was a link to an article suggesting that 90-95% of historians–as opposed to Internet trolls–agree that the war was about slavery.)

And yesterday, an old friend of mine launched an argument on Facebook about President Obama and the Affordable Care Act. He was making spurious claims and didn’t respond well when confronted with facts. He got angry–not just at me, but at all the other people who pounced on him–and left. Deleted all his posts, “unfriended” me, and disappeared.

The Internet is a weird place.