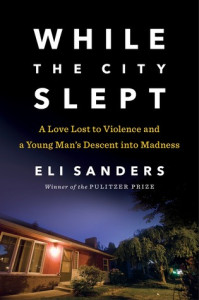 While the City Slept: A Love Lost to Violence and a Young Man’s Descent into Madness

Eli Sanders won a Pulitzer Prize in 2012 for his reporting on the Seattle rape and murder of Teresa Butz. Now he has turned that reporting into a book that is more than just a crime story. With great compassion, Sanders spends as much time painting a portrait of the victims of the crime as he does with the criminal. And so it is that, after we read of the home invasion in the South Park neighborhood of Seattle and hear the accounts of neighbors who heard screams, and after we learn that Teresa, one of the residents of the house, has died and the other resident, Jennifer, has been rushed to the hospital, we spend the next 80 or so pages learning about these two women–who they are, how they met, and how they came to be living together.

That part of the book is a love story, and it seems unusual (but not unwelcome) for a book like this to dwell at such length on the victims of the crime. We learn about Teresa’s large family, her struggles with her sexuality, and ultimately her coming out as a lesbian. We learn of Jennifer’s own family difficulties, being raised by an addicted single-mother, and her career challenges in the musical theater world. (Ironically, Teresa’s brother is a two-time Tony Award winner for his work in Broadway musicals.) They eventually meet in Seattle, fall in love, and plan to marry (even before same-sex marriage was recognized). Both of their families have some difficulty with their plan, but neither is rejected by family.

Interestingly, this part of the book is told in present tense. (“In the fall of 1990, Teresa arrives at Mizzou . . . Jennifer meets a conservatory student named Kerri Sanford . . .”) It’s a puzzling choice, I think, but it does create a kind of immediacy, and even intimacy, so that the reader is drawn into the victims’ lives even more closely

Then we learn about Isaiah, the son of a Ugandan immigrant and an American woman. The household is strict–Isaiah is sent to Seventh Day Adventist schools–but violent, and eventually his parents divorce. Isaiah’s behavior becomes increasingly erratic and worrisome to his family. He gets into trouble with the police, and there are plenty of warning signs that he is mentally ill. He gets worse and he is no longer welcome at his mother’s house. He lives with an aunt and then is kicked out of her home as well. (Shortly afterward, the aunt and another resident of the house die in an arson, which is presumed to be connected to Isaiah.) And then for reasons no one really understands, he broke into Teresa and Jennifer’s house, brutally raped them both multiple times, and killed Teresa.

The remainder of the book deals with the capture and trial of Isaiah for these crimes, but is primarily an indictment of our mental health treatment systems in the United States. Isaiah’s behavior waved all kinds of red flags and he was seen by many mental health professionals, but the system was powerless to do anything to help him or to prevent his horrible crimes.

Realizing that this was the real subject of the book, as I was reading I thought of a situation closer to home. A little over two years ago, Virginia State Senator Creigh Deeds, whom I know from my own political activity, sought help for his son Gus. But the system failed Gus, as the family was told there were no beds available in mental health facilities. At home, Gus became violent, attacked his father with a knife, severely wounding him, and then turned a gun on himself to commit suicide. Since then, Senator Deeds has championed reforms in Virginia and speaks often about the problem. (Sanders, near the end of his book’s Epilogue, mentions the Deeds case.)

Another recent, very different book, Missoula by Jon Krakauer, also deals with the crime of rape, seeking to blame the criminal justice system for its inability to effectively prosecute rapists. This book, though, focuses not on prosecution but, appropriately, on prevention. If the system had better funding, if community mental health treatment centers weren’t so constrained, this particular crime and many crimes like it could have been prevented. The cost of untreated mental illness, the book emphasizes, is staggering. Prosecution of this one crime alone cost “well over $3 Million.” Sanders makes the point this way:

If Isaiah’s crimes could have been prevented through early psychiatric intervention, it could well have saved the public money. This is why advocates continue to argue that it’s shortsighted and self-defeating for political leaders to continually cut, and perpetually underfund, public mental health programs in this country while much more easily approving funds for things like new prisons.

It’s a compelling argument, made all the more effective by the author’s compassionate portrait of the victims. It’s not just the money, he’s saying. See what we’ve done? See what we’ve lost?