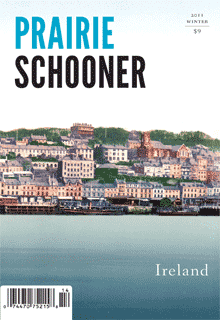 Year of the LitMag: Prairie Schooner, Winter 2011
Vol. 85, No. 4
Ireland
The Winter 2011 issue of Prairie Schooner probably won’t help me figure out what kind of work the editors like. For one thing, it’s the last issue before the new editor took over (it was actually put together by an interim editor). And for another, it’s a special issue focused on Ireland. But, for that, it’s quite an interesting issue, and by the end of it you’re probably speaking in an Irish brogue.
In fact, one of the distinguishing features of the fiction here is the voice that comes through loud and clear. In “My First Time” by Andrew Fox, for example, two teenagers spend a lot of time talking about sex, and the dialect is thick—not so thick that it isn’t understandable, but there’s no mistaking where they are.
There’s also a lot of drinking in these stories, and several of them are set in pubs. “Peach” by Nuala Ní Chonchúir opens in a bar, where a pregnant woman is getting drunk. Thomas Lynch’s one-act play, “Lacrimae Rerum,” also opens in a pub. As does “A Drop to Warm My Blood” by Aiden O’Reilly. “My First Time” doesn’t start in a bar, but it gets there soon enough. Apart from the voice and the drinking, the stories also have in common what the stories in James Joyce’s Dubliners do—these are working (or sometimes out-of-work) men and women who don’t get very far from their roots. The final story in the issue, “Sitting Ducks” by Kathleen Murray, is about two former prisoners who work as orderlies in a hospital and can’t seem to stay out of trouble, but they count themselves lucky that they’ve got work. (I love the character of Viv in this story, an elderly, demented woman who seems to think she’s already dead.)
The issue also has work from a couple dozen poets. What I read of the poetry I enjoyed, but can’t comment on.
When the new editor’s first issue is out I’ll revisit the magazine.