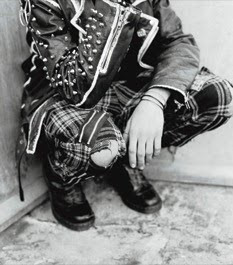 Just two months ago, The New Yorker published “Safari,” an excerpt from Jennifer Egan’s forthcoming novel, A Visit from the Goon Squad. It was good, although it didn’t quite work as a story, and most people I know liked it. This is another excerpt from the same novel that also doesn’t quite work as a story. It’s also very good, and I’m guessing people will like this one, too. In “Safari,” Lou goes to Africa with his very young girlfriend. Here, Lou is in San Francisco, having sex with Jocelyn, a teenage punk rocker, and generally contributing to the delinquency of minors by supplying coke, among other things.

At least in this excerpt we meet Bennie, who is apparently the subject of the novel. This excerpt is told from the point of view of Rhea, a girl insecure about her appearance because of her freckles, and deals with her circle of musician friends: Scotty, Bennie, Alice, and Jocelyn, and their band, the Flaming Dildos. The band gets a big gig, Lou, who’s in the music business, comes to watch, and to quote Marty (a “dork” who plays violin with the band), the whole thing is “intense.” Scotty realizes that Jocelyn is with Lou and so unavailable, and he turns to Alice, which frees up Bennie, who Rhea wants but doesn’t think she can have. It’s all pretty high school because . . . they’re all in high school.

So this was a fun read, and I’m sill looking forward to the book (June 2010 release) but I’d rather the magazine stuck with short stories.

2 thoughts on “>The New Yorker: "Ask Me If I Care" by Jennifer Egan”