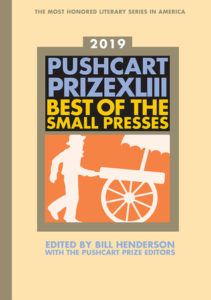 Below are links to the 2019 Perpetual Folly Literary Magazine Rankings for Fiction, Poetry, and Non-Fiction. Scroll down for a discussion of the rationale and methodology behind the lists.

If you find the lists useful, please consider making a donation to support this site.

Rationale for the rankings. Years ago, when I was first submitting short stories to literary magazines, I wanted a way to tier my submissions. I believe in simultaneous submissions, but I didn’t want to submit a story to a great magazine and a not-so-great magazine at the same time because of the risk of multiple acceptances. (If the not-so-great magazine accepted first, it would pain me to withdraw the story from the great magazine.) Developing a ranking of literary magazines allowed me to submit only to those magazines in roughly the same tier. I began sharing the list on my blog because I knew other writers used the same tiered approach to submissions. Eventually, I added poetry and non-fiction rankings and also links to magazine websites.

Methodology.  After several years of making these lists, I made a change two years ago that I have retained. Originally, I based the rankings on a ten-year rolling score that assigned a constant value for Pushcart Prizes earned over that period and a lower value for Special Mentions. Some readers suggested that a five-year rolling score would be better because it would result in newer publications rising in the rankings sooner. But reputations take years to develop, and I didn’t like the shorter period, while acknowledging the validity of the point. So last year I compromised. Now the formula assigns one value for Prizes and Special Mentions received in the most recent five years and half that value for Prizes received in the preceding five years.

Feedback and Support. I welcome your feedback. Let me know if you find a broken or incorrect link, either by leaving a comment or contacting me through this website. I don’t mind hearing criticism of my approach, either, if that’s what you want to share. (Praise is also welcome.) And if you find the lists at all useful, please consider making a donation to support the site. You’ll find a Donation button above and on each of the ranking pages.