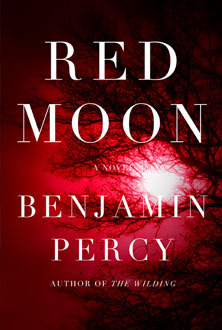 Great cover. But that’s pretty much where my fondness for this book ends. And that’s not really the book’s fault. I generally don’t read science fiction, and I stay away from werewolves and vampires (in fiction and real life). So I probably shouldn’t have even opened this book. But . . . I’ve met the author and I’ve liked his short stories and his previous novel, so I thought I’d give this a try.

As I say, werewolves are not my thing, and this book is so over-the-top with werewolves (“lycans,” technically) that it was a struggle to keep reading. But I did keep reading, and I’m glad I did, because werewolves notwithstanding, there are some important things to learn from this book.

Such as: Be bold. The book doesn’t worry much about realism, or contemporary history, or charges of obvious allegory. All of that is beside the point. We have larger-than-life characters (Chase, the Governor of Oregon, for example, and his sidekick “Buffalo”), we have an Osama bin Laden-like character in “the Master,” the leader of the rebellious lycans, and we have Miriam, a kickass lycan heroine.

Also: Be relentless. While there were a few slow moments, and gore is skippable, for the most part the story grabs you by the throat (with its teeth) and won’t let go. To be sure, it’s so far-fetched that it won’t create nightmares, but it kept me reading if only to find out what would happen to the young protagonists. (I had a pretty good idea, but there were some interesting twists along the way.)

So if werewolves are something you’re interested in, definitely read this book. Otherwise . . . maybe.