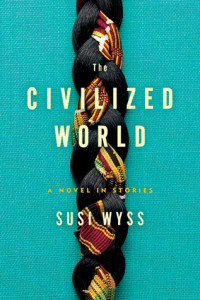 The Civilized World: A Novel in Stories by Susi Wyss

Even if the author were not a friend of mine, I would be writing about how wonderful this book is. I’m so sorry I didn’t read it when it first came out! But I’ve corrected that oversight now and I’m here to say you should read this book.

It says on the cover that it’s a “novel in stories.” After the first couple of stories–all wonderful–I wasn’t too sure about it being a novel. But soon the connections became clear and by the end there was no doubt. This is the story of Janice, an American woman who works on development projects in Africa after first going there in the Peace Corps. Her life intersects in Abidjan with Adjoa, a hair dresser from Accra. The stories give the reader several episodes from the lives of these women as well as a few others who play a role. The result is a completely satisfying whole.

This book won the Maria Thomas Fiction Award from Peace Corps Worldwide in 2011, the year after I won the same award for my book In an Uncharted Country.