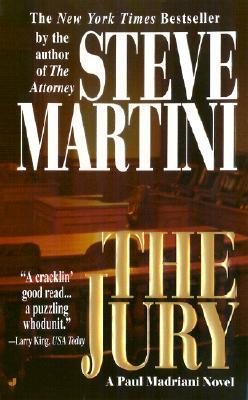 The Jury (A Paul Madriani Novel) isn’t going to persuade me to read any more Steve Martini books. I only read this one because I got the book on tape at a library sale ($0.25) and because I do occasionally read legal thrillers to get a sense of how other writers handle plot. But I don’t think I learned much from this one, other than that you can have huge plot holes if you’re already famous.

The story is about a California attorney handling a case in San Diego in which he represents a scientist accused of murdering one of the researchers who works for him. Not much about the story is plausible and the ending is truly unbelievable. And then there’s the matter of the author’s conservative politics shining through in some of the statements made by the protagonist. That shouldn’t matter, but it did to me, just as Barbara Kingsolver’s work bothers some conservative readers. Okay, now I can say I’ve read a Martini novel; that’s enough.