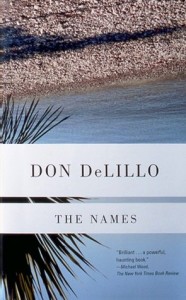 The Names by Don DeLillo is a fascinating but somewhat fuzzy book. Set primarily in Greece, it tells the story of James Axton, an American who develops risk analyses, those odd-sounding reports used by international investors and insurers. When the book was published in 1982, would readers have suspected that Axton worked for the CIA? It was the first thing I thought of.

But Axton’s work is only a part of this intricate story about language, alphabets, secrecy, and cultural identity. He is part of an expatriate network–one that I also used to be part of–that tries to understand local cultures while existing separate from them. Language may be the key to accessing the local culture, but for most expats–Axton included–languages remain elusive. He tries Greek, but he almost revels in his failures. On the other hand, his friend Owen is obsessed with learning languages or, more precisely, their alphabets. How do these symbols really represent the cultures that created them?

There’s a lot more to it than that. The book is full of richly drawn characters seen against a complex backdrop of historical reality–it’s the summer of 1979 and the Shah of Iran has just been deposed–and its themes are plentiful if, at times, a bit hard to make out. I read the book for book club and one of the members had just read it for the third time. Even for a superfan of DeLillo, that seemed like a lot. But I wouldn’t mind taking another pass through this one to see what I missed the first time around.