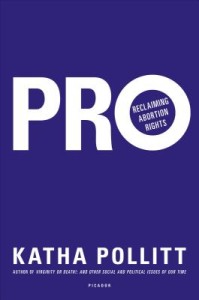 As a pro-choice pragmatist (that’s a liberal who understand that compromise is necessary to achieve progress), I was predisposed to Pollitt’s arguments in this book but expected that her position was unrealistic. Now that I’ve read the book, I’d say that’s about right.

Mostly, of course, the book is an attack on the hypocrisy and irrationality of the abortion opponents, mostly Republican conservatives, especially conservative Christians. She can be pretty nasty in these attacks, but for the most part, I was right there, cheering her on. The Right’s arguments are generally twisted and empty. I think Pollitt could have spent more time on the fact that most of the anti-abortion arguments are religion-based. She does point out that the Bible is actually silent on the subject of abortion, but she doesn’t question why the Right’s religious beliefs should be imposed on the rest of us.

However, Pollitt is also critical of moderate pro-choicers like Hillary Clinton who take the position that abortion should be “safe, legal, and rare.” Pollitt doesn’t care about the “rare” part of that equation, but I see that as the key not only to quieting the rancor between pro- and anti-choice factions, but also an important step in achieving gender equality.

For me, “safe, legal, and rare” exposes the Right’s hypocrisy. Clearly, the Right isn’t interested in reducing the number of abortions, because they insist only on criminalizing the procedure. We know that won’t achieve the goal of reducing abortions—it will only make them more dangerous. So they are really trying to accomplish something else, and this is Pollitt does make clear—it’s about a social agenda in which women are kept in their place. And yet, on the last page of the book, Pollitt does finally make this argument:

“For those who are troubled by America’s high abortion rate, the good news is that we already know what will lower it: more feminism. More justice. More equality. More freedom. More respect. Women should have what they need both to avoid unwanted pregnancy and childbirth and to have wanted children.”

Exactly. But I think that’s the argument that has to win the day, ultimately. And it achieves much more than just reducing abortions.

[This book was my Reading Liberally group’s January 2015 selection. Let me know if you’re interested in our reading list.]