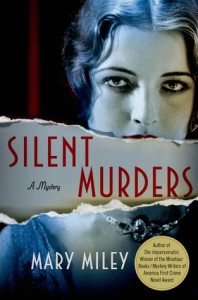 This is the second in a series of mysteries set in the Roaring Twenties. The first volume, The Impersonator, set in the Pacific Northwest, was interesting because the protagonist was participating in a scam to collect the inheritance of a woman missing for years and in the process found herself embroiled in bootlegging and murder. The impersonation alone gave the story suspense that didn’t depend on the solution to the murder mystery.

In this book, the same young woman is now in Hollywood, working for Douglas Fairbanks and Mary Pickford. Although she has an assumed name, like many wannabe stars in Hollywood, she’s basically herself here. But when a series of murders happen around her, she becomes a sleuth, aided by Fairbanks, and discovers the truth when the police don’t seem to be able to do so.

It’s a fast, enjoyable read, and the book’s use of historical figures many of us have heard of–Fairbanks, Pickford, Myrna Loy, Charlie Chaplin, etc.–is smart (although it does limit the suspect pool somewhat). The author’s detailed research is on display here, too, and the rendering of the 1920s is entirely convincing.

There is a fair amount of explanatory dialogue that was a bit frustrating–characters frequently tell each other things that they probably already know, but that the author wants the reader to know. But aside from that, it’s definitely a good read.