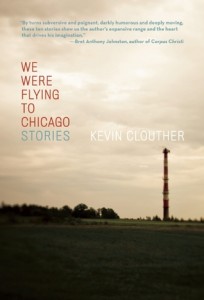 We Were Flying to Chicago by Kevin Clouther

I might not have heard of this collection of stories except I’m going to be on a panel with Kevin Clouther and another author (Craig Bernier) at the Virginia Festival of the Book in a few weeks. Unless I’m moderating a panel like this, I rarely have the time to read the other panelists’ books ahead of time, but because I have no moderating chores at this year’s festival, I decided I would read these two books.

And I enjoyed this collection very much. It’s a mixture of realistic stories—most of which seem to end before you might want them to—and unrealistic stories that are somewhat in the vein of Haruki Murakami (minus the enigmatic cat).

An example of the first kind of story is the last one in the book, “Puritan Hotel, Barnstable.” In it, Michael has come to Barnstable to visit his brother, Connor, who is hospitalized and awaiting surgery to remove a brain tumor. Their father is present in the story—the father from whom Michael is estranged—and there is an element of lapsed Catholicism, a theme that runs throughout the book. But Michael leaves the hospital before the surgery, promising Connor that he’ll be there when Connor wakes up.

The story “Open House” is an example of the more unrealistic work in the collection, although it can also be viewed realistically. Two people—not a couple, apparently—work for an “Agency” (the CIA, I thought for a while, but maybe a Real Estate Agency) and pose as a couple interested in buying homes. They go from one open house to the next, shills that demonstrate to real potential buyers that there is competition. None of which is explained to the reader.

The stories in the collection have appeared in Puerto del Sol, Gettysburg Review, Baltimore Review, and elsewhere. It’s a fine book, published by Black Balloon Publishing, which is also new to me.