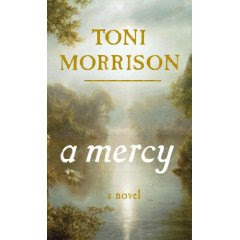 This is an extraordinary book. One of the things that impresses me about Toni Morrison–and frustrates me at the same time–is that she expects the reader to figure it out. She drops us in the middle of something, doesn’t give us so much as a hint of what’s going on, but assumes that we’ll eventually get our bearings and will let the story and the language carry us along until we finally catch on. That is certainly true of Beloved, Morrison’s masterpiece, and it’s true of this wonderful new book, as well.

So, here’s a tip. Read the book twice. It’s short, it won’t take long. Just plow through the first time and when you get to the end, go back to the first page. As you begin reading the first time, you don’t know who the speaker is in that first chapter or why she’s searching or where she’s come from. She mentions a corn-husk doll and an omen in the steam of a kettle and a woman holding a boy’s hand, and none of those things make sense. And, frankly, I’d forgotten all about them by the time they reappear in the story, so that when I started to read the book again to look for clues as to what was going on I was delighted to recognize these elements, and others.

Even if you don’t read it twice, you’ll get that this is a story about a family in the late 17th Century that suffers all the hardships that colonial life in America had to offer, especially–but not only–for slaves. Slavery in particular, though, dehumanized its victims, so that the goal many sought was simply to regain their humanity. That’s a big enough lesson to learn, but it isn’t hard to think about this message in the context of our recent election, and the conversations the campaign has allowed us to have about race. Or allowed some of us to have, anyway.