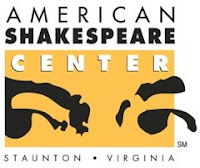 Murder. Revenge. Gambling. Belly Dancers. The spring season of the American Shakespeare Center at Staunton’s Blackfriars Playhouse has something for everyone.

First, there is The Comedy of Errors, a romp of mistaken identity in duplicate. Josh Carpenter is Antipholus of Syracuse and Luke Eddy is Antipholus of Ephesus, twins separated as infants, each accompanied by his servant, similarly separated twins named Dromio, played by Rick Blunt and Dennis Henry. These four are superb as they tumble in confusion around the bombastic Adriana, wife of Antipholus of Ephesus, who owes her commanding presence to the talents of Ginna Hoben. Also delivering fine performances are Brandi Rhome, graceful as Adriana’s sweeter sister, Luciana; Daniel Kennedy as both the Duke and Dr. Pinch; and Kelley McKinnon, doing triple duty as the kitchen maid, the belly-dancing courtesan, and the abbess who is, in reality, the long-lost mother of the Antipholuses.

It’s light-hearted fluff and, as performed by this talented cast, enormously entertaining. If there is a flaw here it is at least partly the playwright’s fault for beginning with a long expository speech by Egeon, father of the Antipholuses, into which Jonathan Reis is unable to breathe much life. The exposition must have been deemed necessary to explain to audiences what was going on, but it slows the opening considerably.

Next, there is one of the greatest plays ever written, Shakespeare’s Hamlet. This masterpiece is, unquestionably, a tragedy of revenge. But it is also a fascinating psychological portrait of a young man who longs for certainty—does the ghost speak the truth about his father’s murder?—and knows that the only real certainty is man’s inescapable death and decomposition.

Luke Eddy, as Hamlet, is outstanding. From his initial confrontation with the ghost, to his feigned madness, to his contemplation of Yorick’s skull and the ravages of decay, to his moving apology to the grieving Laertes, Eddy’s portrayal of the tormented prince is magnetic. Watch his steely eyes as he confounds the pompous Polonius, wittily portrayed by Dennis Henry, and toys with the bumbling Rosencrantz and Guildenstern, played by Rick Blunt and Ginna Hoben. Especially compelling are Eddy’s encounters with Brandi Rhome, who instills the character of Ophelia with a regal charm that devolves gradually and convincingly into genuine insanity. Josh Carpenter is an excellent Laertes, devoted to his sister Ophelia while he lovingly mocks their father, Polonius. Carpenter shines in the climactic and deadly confrontation with Hamlet. Other standouts are Aidan O’Reilly as Horatio, Kelley McKinnon as Gertrude, and Daniel Kennedy as the Player King.

The final entrant in ASC’s spring rotating repertory is the modern Hamlet spinoff, Tom Stoppard’s brilliant Rosencrantz and Guildenstern Are Dead. Set against the same backdrop as Hamlet and featuring many of the same characters—one of the joys of seeing ASC do this play and Hamlet together is the casting of the same actors in the same parts in both shows—Stoppard is exploring very different territory. Whereas Prince Hamlet struggles to decide on a course of action to avenge his father’s murder, his old friends Rosencrantz and Guildenstern have no such choice. They are in the hands of fate and at the mercy of its winds. As Guildenstern admits under Hamlet’s questioning, they were sent for, but that’s all they know about the past or how they came to their present state.

The palpable chemistry between Rosencrantz and Guildenstern, played, as in Hamlet, by Rick Blunt and Ginna Hoben, is evident from the opening sequence. They are on the road, uncertain as to why, and entertain themselves by flipping coins. The surprising outcome of the coin toss raises questions of chance and probability that the travelers are ill equipped to answer. Blunt plays Rosencrantz with masterful buffoonery and comic timing, and Hoben’s blustery and didactic Guildenstern is equally appealing.

The tragedians they meet on the road, led by Daniel Kennedy as The Player, fulfill an even more prominent role here than they do in Hamlet. Kennedy is excellent in his reprise of the part, and there is a terrific performance by Josh Carpenter as Alfred, a member of the troupe who takes on female roles and, or so it is implied, may offer other services to help the actors make ends meet. Carpenter—reluctant one instant, eager the next—is hilarious. We also have Eddy again as revenge-minded Hamlet, Rhome as tragic Ophelia, and Henry as pedantic Polonious, all facilitating Rosencrantz and Guildenstern’s voyage of destiny.

As is the custom at the Blackfriars Playhouse, following Shakespeare’s original staging practices, sets for these plays are non-existent. The costumes, however, are marvelous. Jenny McNee’s designs for The Comedy of Errors are colorful and elaborately evocative of the Ionian setting, and Erin West’s for both Hamlet and Rosencrantz and Guildenstern are Dead richly suit the members of the Danish court. Especially fitting are the ghostly white garments for the spirit in Hamlet and for Rosencrantz and Guildenstern in Stoppard’s play.

All three shows run through mid June at the Blackfriars Playhouse in Staunton and should not be missed.