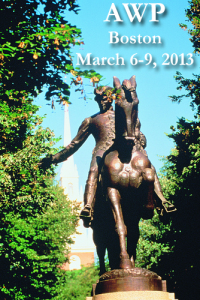 Just got home from a weekend trip to Chicago last night, only to discover that a snowstorm was threatening to disrupt my planned trip to Boston this week for AWP. Although we’ve had predictions of significant snow earlier in the winter, and nothing materialized in my part of Virginia, the forecasters seem more certain this time. If it does come, it would be a huge travel nightmare for me–and lots of other folks.

So last night I changed my reservation. It looked like early Tuesday would be a problem too, so I went for an evening flight, even though that would put me into the hotel I booked after midnight. This morning it appeared that the morning flight was a better bet, so I shifted again, and now I’m leaving a full 24 hours earlier than originally planned. And that means I’ll have half of Tuesday and all of Wednesday to explore Boston before conference festivities begin on Wednesday evening. (Current plans: MFA, North End, maybe Harvard Square.) So I think I’ve dodged a bullet, as the forecast for Wednesday is 16 inches of snow. Let’s hope it’s gone by the time I get home on Sunday.

If you’ve never been to an AWP, you should take a look at the conference schedule: AWP 2013. Three solid days of panels, readings, and parties. 10,000 writers. 700 exhibitors in the bookfair. It’s exhausting.

I still don’t know which events I’ll be going to. The only thing I’m certain about is my booksigning at 2pm on Friday at the Press 53 Booth #766. I’ll be there a lot, as Prime Number Magazine will be sharing the space. Stop by and say hello!