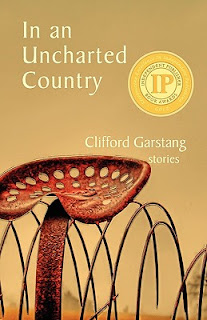 Since my book, In an Uncharted Country, came out about a year ago, I’ve visited several book clubs that have chosen it to read and discuss. I attended two just this week! I love it. I’d enjoy doing more, and judging by the lively discussion in even the smaller groups, my book seems to make a good choice for clubs.

The first visit this week was to a book club in Harrisonburg consisting of women connected to James Madison University. There were 14 or so women there–including a couple of writers–and most had read the book very closely, leading to some probing questions: Is there really a sun-worshiping cult in the Valley? Which story is my favorite? Since the stories all stand alone, was it originally conceived of as a book? What happens at the end of “The Nymph and the Woodsman?”

The second visit was to my own book club, or rather the club that The Sacred Circle Bookshop has been running for the past year. I’ve been a participant since the beginning and so I was honored when the store chose my book for this month’s discussion. Although this group was smaller than the other club, the people who came had obviously also given the book a careful read and also asked great questions. One woman asked about the fact that the women in the book seemed particularly flawed–was I saying something with that? But I asked if she thought the men in the book were any better, and on reflection she realized that they weren’t. I wasn’t trying to invent any heroes in the book–just people who were as real as I could make them, and everyone I know has flaws. Except you, of course. You’re perfect.

It’s a little embarrassing to be the center of attention like that, but it is enormously gratifying to speak with people who have read the book.