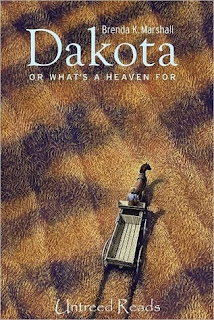 Dakota, or What’s a Heaven For
Brenda K. Marshall
North Dakota Institute for Regional Studies, 2010
What to make of an old-fashioned telling of a thoroughly modern story? Brenda Marshall’s Dakotamay put off some impatient readers by following certain literary conventions of the time about which she is writing (the 1870s)—chapter headings describe what will happen in that chapter, for example, and rich exposition helps complete the portrait of the people and landscape of the Dakota Territory—but persistence will be rewarded. This novel tells a surprising and a compelling story that you haven’t heard before, and it’s filled with extraordinarily complex and memorable characters.
The “Pre-Amble” offers clues as to what the book is about: it’s a story of independence. “That narrative of independence remains as powerful, as false, as necessary as ever in the Dakotas. It has become our fetish, replacing the lost object of desire, the impossible place that never was. You have been told that there is nothing there. I tell you there is too much. Even where there is nothing, there is too much of it.” This prologue also gives us a list of the various narrative voices the reader will meet, including the book’s dominant voice, that of Frances Bingham: “I mean for this to be my story. It, too, is a story of what a woman’s patience can endure, as well as of what a woman’s resolution can achieve.”
This Frances has married one Percy Bingham in order to be near his sister, Anna, the true object of Frances’s desire. Percy, however, is no great catch, although his lack of ambition means that proximity to Anna is secured, even when the family moves from St. Paul to the “Bonanza Farm” of Percy and Anna’s father, John Bingham, who has acquired his stake through his connections to the Northern Pacific Railroad. It is there, on the farm, that Frances discovers her independence, and allows herself to pursue her “object of desire.” But it is the 1870s, and nothing is very simple. As a woman, one who is more competent than any of the men around her, she cannot easily strike out on her own. She is a wife and is herself an object, no matter how she would like to be defined. When she is rebuffed by Anna, she is reluctant to act when a new desire emerges.
Life is hard in the Dakota Territory, and not just for Frances. Blizzards seem endless, and are followed almost invariably by flooding and disease. Alcoholism is not unusual, and there are other addictions as well. One of the most memorable characters in the book is Little Carl, who harbors a shocking secret. There is also Jack Shaw, a Russian Jew who abandons the swamp land his community bought, believing the marketing hype about the golden prairie. There is manipulative J.B. Power, an executive of the Northern Pacific Railroad, the driving force behind the settlement of the territory. There is Alexander McKenzie, the scheming businessman who bends everyone, including politicians and businesspeople, to his will, who has his sights set on Frances. And there is sweet Kirsten, the Norwegian girl who learns, even better than Frances, how to survive on her own.
Frances, though, is the heart of the story. And while the reader’s sympathy is often with her as she battles her drunkard husband, as she seeks recognition for her skills, as she tries to do right by her less-fortunate neighbors, as she copes with her own desires, her struggle for independence reveals her imperfections. She is, ultimately, selfish, and for that she pays a high price—and learns a very hard lesson.
But the book is also a story of the Dakota Territory, and the author’s command of its history is truly impressive. It’s well worth reading.