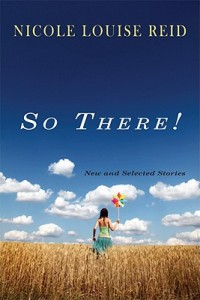 The stories in this surprising, slim collection by Nicole Louise Reid occupy a narrow, rich range. They share a lyrical, concise language, but they also explore common territory, the dark and deeply emotional side of childbirth and parenting. The result is a sometimes disturbing, but ultimately satisfying, reading experience.

First time through, pay attention to the children, especially the babies. They’re everywhere. In “To the Surface for Air,” a young woman who has recently given birth tells the story of watching a river dolphin who repeatedly tried to bring its dead baby to the surface. In “Two Swimmy Fishes,” a woman gives birth to twins. They don’t survive, but the woman names them and behaves as if they were alive. In “Pearl in a Pocket,” the narrator’s mother is pregnant again, after many stillborn female babies. And in “So There” (without the exclamation point of the book’s title), the narrator’s mother gives birth to a baby that may or may not be her husband’s, but the child does not live—whether killed by the mother or father is not clear.

Even the children who survive their infancy struggle, thanks to their parents. In the book’s opening story, “If You Must Know,” Pearl—whose father left home and is living with his girlfriend on a houseboat—believes she has become host to a cicada that entered her while she was making love to Wallace. Later, when Wallace returns to capitalize on her notoriety, Pearl excises the bug, which is surely a metaphor for an abortion or stillbirth. In “Glimpses of Underthings,” Agnes is a tease to the high school boys, partly in reaction to the odd behavior of her mother and her lecherous father. In “So There,” the narrator’s flirtatious mother loves to torture her jealous husband, driving her daughter further away.

Next time through the book, focus on the language and the fresh word choice. In “Like Paper Snow,” a story about a sad childhood memory: “To know which morning is the dream—that yellow halting years ago or nearly every woken day since—I’ve come back to this small, white room of washing and waiting.” In “Someone Like Me”: “. . . I barely listened to Caroline, barely noticed anything around me, except for the honeysuckle fearlessly climbing the kudzu sweet with hope.” In “Careless Fish”: “There are practicalities, too. Of clothing and hair. Of nakedness and moonlight. In a new moon, maybe I’d pretend he couldn’t see me. But only a sliver bitten out of the night is too much light.”

These stories deserve close attention. And while they are dark, offering little in the way of redemption, each one is a finely crafted work of art and a deep study of what makes us who we are.