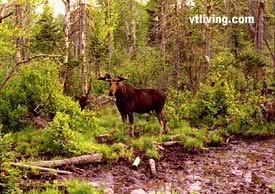 I want to see a moose. I still haven’t, but Jim, one of the other writers living in the same cabin I’m in, saw one on Rte. 125, a mile or so East of Bread Loaf, mid morning. This photograph is NOT Jim’s moose . . .

A couple of days ago, I mentioned a highly imagninative reading by Oni Buchanan. It turns out that her Mandrake is online. Definitely worth your exploration.

The first event on Wednesday was Kevin “Mac” McIlvoy’s lecture, “Somatic Wisdom in Fiction.” The enigmatic title appealed to me; Mac didn’t disappoint. Citing many examples, including several from Anais Nin, Mac was talking about fiction that feels, that evokes visceral reactions in the reader, and he speculated as to how that works.

Mid-morning I joined a group meeting with M.M. Hayes, Editor of StoryQuarterly. She talked about openings and the kinds of opening lines that appeal to her and keep her reading.

In the afternoon I attended a plot craft class by Randall Kenan. Comparing the classics of Greek literature to modern tabloid headlines, Randall contrasted drama with melodrama. We considered how a number of well-known short stories might be boiled down to headlines and then, as an exercise, we attempted to do the same with stories of our own. Since I’m planning revisions to “Savage Source,” I used that story and stating the plot in a single Subject-Verb-Object sentence was useful.

The evening reading by Laila Lalami, an excerpt from her novel-in-progress, was wonderful. Although I know Laila was anxious, she did a great job and, more importantly, the chapter was terrific. After Laila, Carl Phillips read 10 poems. Carl’s poetry is quite serious, and yet he is very funny when he speaks.

The second of the 2 waiters’ readings was after that. Lots of fun.