Robert Kostuck is an M.Ed. graduate from Northern Arizona University. Recently published fiction, essays, and reviews appear in many American and Canadian print journals. He is currently working on short stories, essays, and novels; his short story collection seeks a publisher. 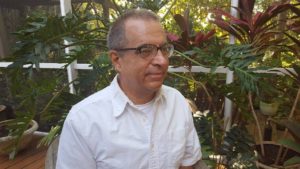 Robert’s comment on “Mí Encanta Panamá”—The inspiration for this story was limited. Years ago a friend in the Peace Corps was stationed in Panama. On her first day in La Palma she took several photographs of the rooftops of buildings and a storm approaching from the sea. One of these photos served as inspiration for the first sentence of the story. The rest of the story I made up from the jumble of memories in my mind.