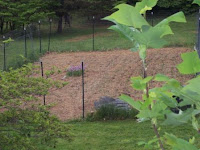 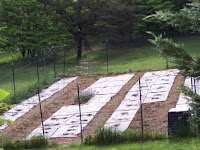 This year’s garden still isn’t fully planted, but I’m getting there. So far I’ve got 2 kinds of eggplant, 4 kinds of peppers, yellow and green zucchini, crook-necked squash, melon, cucumber, corn, okra, bush beans, Swiss chard, and several herbs: basil, rosemary, sage, chives. Still to come (I started some seeds): acorn squash, pumpkin, sunflowers, broccoli (probably doomed, given my track record), and more varieties of peppers (but the pepper seeds have been slow to germinate, so may not work out). And that will probably be it for this year. If it produces decently, I’ll have a ton, so I expect to share. On the other hand, I haven’t been too successful in the past, mostly because I’ve let the weeds take control. I’m determined to do a better job of that this year, although I will be away for some periods in June and July, so the same thing may happen that has happened before.

But you’ll note the landscape fabric in the second picture, and that gives me some hope that at least the weeds won’t overwhelm the plants. Now, the seed beds are not so well-protected, so I’ll have to work harder to save the corn, beans, okra, and broccoli. But I’m optimistic!