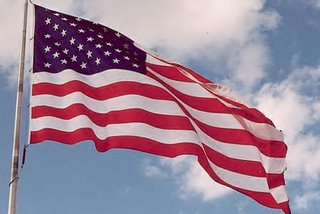 I’m not running for political office any time soon, but today seems like a good day to think about where I stand on ten issues that I would like anyone who wants my vote to address:

1. Iraq. If I were a single-issue voter, this might be my hot button. George Bush lied about the reasons for invading Iraq (not the first lie he told us and certainly not the last); he thumbed his nose at the rest of the planet by invading Iraq; and he’s totally botched the occupation. Because that’s what we are now—an occupying army. We need a flexible timetable for withdrawal. Declare victory—Saddam is in custody—and get out.

2. Terrorism. After an initially honorable effort to build an international coalition against terrorism, Bush made a colossal error by invading Iraq. Now, the coalition is in shambles, and instead of defeating terrorism we have created countless new terrorists, a whole generation of them. The world is a far more dangerous place as a result. The so-called ‘war on terror’ is a joke, thanks to Bush. It’s typical of Republicans to think you can solve your problems by locking the bad guys up; they ignore the fact that there’s another bad guy to take his place, usually more than one. What we need to do is address root causes of terrorism, and these are part economic and part geo-political and the United States has been moving in the wrong direction on both fronts for a long time.

3. Abortion. First of all, I think single-issue voters are making a mistake when they focus on this one. Just because a candidate would wish to ban all abortions doesn’t mean he or she would make a good president, or dog-catcher, or whatever. And the same goes for the candidate who supports women’s reproductive choice. But beside that, it’s a difficult issue, one that for many is strongly colored by religion. I think abortions are unfortunate consequences of our times but that it makes no sense to criminalize the practice. Instead, we should make sure that they are safe but rare, and to do that means taking steps to make sex education and contraception available, and also to improve economic opportunities for young men and women at risk.

4. Health Care (and Social Security and Medicare). The first step toward solving these issues is a National Health Insurance plan and a program that will wean workers from employer-subsidized insurance. One of the potential weaknesses in our industrial competitiveness is the cost of health insurance, but a national scheme would actually be more efficient than private insurance and eliminate this drain on industry. If we were running a balanced budget instead of the huge Bush deficits, Social Security problems would not look as bad as they seem to now; instead of privatizing Social Security, which wouldn’t come close to solving its financial problems and instead would put millions of Americans at risk, we should be looking at ways of strengthening the current program.

5. Gun Control. Opponents of gun control legislation rely on a misreading of the Second Amendment and its intent. All guns should be licensed and tagged. Many guns should be banned. Guns don’t kill people. People with guns kill people.

6. Death Penalty. There is no justification for the death penalty that makes sense. It is all about revenge and retribution, which are not principles Americans usually espouse; its deterrent effect is negligible; and the risk of getting it wrong is too high.

7. Gay Marriage. First, this isn’t a federal issue and the amendment to the U.S. constitution that Bush supported was just plain stupid. Second, the states are absolutely wrong to amend their constitutions to define marriage in a way that seeks to prohibit gay marriages from taking place. Virginia’s proposed amendment is particularly wrong-headed, as it will impact more than just gay couples. Supporters of the prohibition say that gay marriage is an assault on the institution of marriage. I’ll take that argument seriously when they propose eliminating divorce laws. In the meantime, I see nothing objectionable to a civil union law that allows marriage-like partnerships for gay couples.

8. Energy. Every time I hear a Republican say we need to reduce our dependence on foreign oil, I cringe. What we need to do is reduce our dependence on oil, period, foreign or otherwise, which means investments in alternative energy sources. Nuclear energy is an option, but its hazards cannot be ignored. Drilling for more oil in ANWR is only going to make our addiction worse and provide minimal relief from the current crisis.

9. Environment. Anti-environmentalists must have concluded that human beings are doomed anyway, so we might as well take full advantage of the planet while we’re here. Or maybe they assume it won’t be long before we discover an Earth-like planet elsewhere in the universe, unspoiled, where we can move when this one gets too polluted. And then we can start all over again. We need leaders who will elevate environmental protection to a top priority.

10. Taxes. Nobody, not even a Democrat, likes to pay taxes. But Republicans are incredibly short-sighted on this issue as they are on so many others. The taxes we pay are investments in the country—to provide services and infrastructure that we need now and in the future, and to provide a safety net for our fellow citizens. That’s what builds a strong country. That’s patriotism.