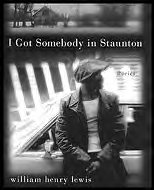 . . . comes to Staunton. Last year, when William Henry Lewis published his second short story collection, I Got Somebody in Staunton, I received an email from Amazon.com suggesting I might be interested in the book. Now, I don’t know if that was because Edward P. Jones had blurbed the book and my records showed I had ordered a Jones book or two from Amazon, or if it was because Amazon.com made the connection between the Staunton of the title and my mailing address (with which they are way too familiar). [Note to self: include “New York City” in the title of next book to ensure that Amazon promotes it as widely as possible.] At about that time, the Washington Post reviewed the book and my sister emailed me: Have you seen this book?

I read the book and loved it. It bears some similarities to Edward P. Jones, I thought, but is its own book, too, fresh and vibrant. Here’s a snippet of that Post review:

“From the South to the North. From the country to the city. From fields of kudzu drenched in Southern racism to Northern cityscapes freighted with urban violence. Similar to Jean Toomer’s classic novel Cane , the stories and vignettes in William Henry Lewis’s I Got Somebody in Staunton trace the route of the great migration. But as Lewis’s characters change landscapes, the same issues bedevil their working-class black identities — whatever the milieu and whether one is headed from the South to the North, or the reverse, or even to the Bahamas and beyond.”

I wasn’t alone in my appreciation, because this year the book was a finalist for the Pen/Faulkner award. Here’s what they have to say:

“I Got Somebody in Staunton is a collection of ten dazzling stories set variously in Bedford-Stuyvesant; Denver; and Staunton, Virginia, all deeply concerned with the pride and pain of African-American heritage. In William Henry Lewis’s title story, a black college professor, haunted by his dying uncle Izell’s memories of lynchings and the ways of the old South, flirts with danger by giving a ride to a flirtatious young white woman. A winner of The 2006 Black Caucus of the American Library Association (BCALA) Literary Awards for this collection, Lewis is also the author of In The Arms of Our Elders, an earlier collection.”

Now, here’s the best part. After I read the collection, I found an email address for Lewis and wrote to him, suggesting that if he were ever in the area I’d like to arrange a reading at our local independent bookstore, The Bookstack. We corresponded, and because he is indeed in the area this weekend for the Pen/Faulker Award Dinner in Washington, he appeared this evening at the bookstore. Instead of a reading, the charming and approachable Lewis carried on a conversation with the 20 or so folks in the audience, answered questions, and then signed a huge stack of books. (The Bookstack–get it?) It was a great pleasure to meet Hank Lewis and his wife, Sarah, and I look forward to seeing more of his work in the future and, with any kind of luck, staying in touch.

Hank: Thanks for coming!