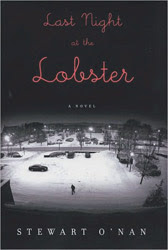 Stewart O’Nan has written a dozen or so books (and, in fact, is currently on tour for his latest, Songs for the Missing), but this is the first of them that I’ve read. I will seek out others. Last Night at the Lobster is the story of the closing of a restaurant and the end of a relationship, and it’s also a story about work. Manny DeLeon is the hard-working manager of a Red Lobster restaurant that the corporate owners have decided to close. Manny will be all right because they’re moving him and a few other employees he has selected to an Olive Garden a few miles away, but Manny’s been at the Lobster a long time so this is a major upheaval in his life.

One of the employees who will not be coming with him to the new place is Jacquie, not because he doesn’t want her to but because she thinks it’s best if they don’t work together. She’s in a new relationship, with Rodney, a good guy, and Manny also has a new girlfriend, Deena, who is pregnant with his child. That doesn’t mean Manny doesn’t still have feelings for Jacquie, though, and his wavering provides a good deal of the tension for the book.

There are other sources of conflict, though. The area is being hit by a snowstorm just a few days before Christmas. The staff bicker over customers and perceived wrongs. The dinner crowd doesn’t materialize because of the weather. Some workers don’t show up, and Manny understands why. Another worker steals booze. Still, the last night has to go on, it’s their job.

And that’s it. The book ends when the Lobster closes for the last time and we see Manny answer the questions he’s been asking himself. It’s a quiet book, very short, and not much happens. But it’s completely satisfying because Manny is a complete character. He’s flawed and conflicted, on the verge of making a serious mistake, or maybe he’s already made it, and the reader is pulling for him. I recommend this short book highly.