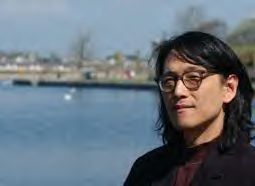 This afternoon I attended a reading by poet Li-Young Lee, sponsored by Shenandoah and the Glasgow Endowment. I arrived early, just as R.T. Smith, Editor of Shenandoah, was accompanying Lee into the auditorium. Rod introduced us and we compared notes briefly about Chicago—he lives in Uptown, near the Aragon Ballroom, I used to live considerably south of there, in Lincoln Park—and about Singapore, where I lived for a long time (he was born in Indonesia). I also mentioned to him that I’d read his memoir (The Winged Seed) for a class. His response: “Ach, that book, what a mess.” I didn’t want to offend him with agreement, so I said that I’d found the book very, um, lyrical. He seemed to take that well.

He was suffering from a cold, which may have affected his voice, but his reading was delightful. He read all new stuff, some of which he said he was still tinkering with, but it sounded great to me. Immigration is a familiar theme for him and the first three poems were about that. The final poem, called “Station,” he said was inspired by his daily transit through Union Station in Chicago, where he was always deeply affected by the public address announcements: “Now arriving, the Twentieth Century.” He called his poem a “riff” on that sentiment. It’s a terrific poem.

I picked up a copy of Rose, which he inscribed: “Cliff, Flowers, we fall open unto light, Peace, Li-Young Lee”.

Here are three poems, an interview and an audio reading and conversation. He’s definitely a poet worth spending time with.