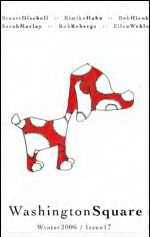 I was surprised at how much I enjoyed the stories in Washington Square, the NYU student-run journal. For example, there’s the story “Zero” by Harper Alexander, which reads a little like a Murakami story (possibly because it is set in Japan, but I think there’s more to it than that). The story is about Shibata, a 41-year-old teacher and single father.

“Getting into his car, Shibata realized that, having already left his workplace and not yet arrived at his son’s school, he was nowhere. At that moment he was not only between responsibilities but also outside of responsibilities. If anyone called his son’s school at that moment to ask after him they would say “Shibata is not here yet,” and that would be true. And if anyone called his work, they would say “Shibata is not here anymore,” and that would also be true. For the moment, Shibata was between and outside and no one could know if he was moving as fast as he could or if he was meandering along his way. This too felt good to Shibata, being truant not only from his job but from time itself.”

That sounds like Murakami, doesn’t it? I also enjoyed a story by Jane Darby called “The Beauty of All This,” about a woman whose neighbor leaves an infant with her during an emergency.

“The kid had been crying–full throttle caterwauling–for almost two hours. ‘She’ll come back,’ I assured him. ‘She’ll be back any minute.’ But he just hollered, squirming and twisting in my arms. Finally, he exhausted himself and fell asleep on my bed, his face blotchy from exertion and his breathing broken with sighs and gasps that spoke of a world of sorry. I stretched out next to him and watched him sleep.”

You can see where that story is going and the treat is experiencing what happens when it gets there. Very powerful.

And I’m not a big fan of stories about the drug world–Denis Johnson, for example, does little for me–but “Interstate,” by Rob Roberge had me on the edge of my seat. A loser son of hippies, is driving cross-country in pursuit of a score and his traveling companion, aptly named Flip, runs into some trouble in a meth deal. You have to hope the narrator learns a lesson there, but it doesn’t seem likely.

All in all, a very nice little journal that I’ll have to seek out again.