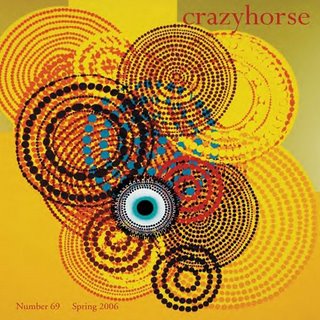 Although I’ve submitted my stories to Crazyhorse in the past, Issue 69 (Spring 2006) is, I believe, the first I’ve held in my hands. It’s terrific, with a comfortable square shape and a provocative, colorful cover, and I renewed my as-yet-unexpired subscription today (which I earned initially by entering a contest I didn’t win).

I love it when I open a journal and find something, a poem or a story or an essay, by someone I know. That happens more and more often. In this case, there is a poem by James Grinwis, “Bug Land”. Here’s an excerpt:

“Here, the grasshopper lives
like a nervous man. He sits there
with the tiny capsule of his heart,
keeping me contained. I seem
trapped inside of a beat. Mosquitoes
tingle the mouths underneath
leaves. Town shimmers
like a toxin, voracious and green,
more forest than the creature,
more creature than the green.”

The fiction in the issue is fascinating. It’s all quite good, and in ways linked. In Molly McNett’s “The Book of Signs,” Ruthie is a troubled young woman who feeds her nervousness: “unbuttered popcorn if it was a good day, or frosting right from the can on a bad one.” (There’s much more to the story than this—Ruthie has a chance to break free from her suffocating mother by interacting with a young wheelchair-bound girl in her care, and whether she will rise to the challenge provides the story’s tension.). In Steven Schwartz’s “The Theory of Everything,” it is Rex who has the eating problem: “He’s always struggled with his weigh. Comfort food he takes to a whole new level.” But there are kids in need in this story, too, who come to live with their grandparents because their mother, a heroin addict, abandons them and Rex, their father, is, at best, bipolar. He, in fact, reminds me of the loser in John Tait’s story, “Reasons for Concern Regarding My Girlfriend of Five Days, Monica Garza,” and the kids remind of five-year-old Roxanne in Lorraine M. Lopez’s “The Landscape,” who is in the care of her aunt and uncle because Roxanne’s mother is just out of a halfway house. These are all engaging stories filled with not only dysfunctional families but dysfunctional people.

The highlight of the issue, though, is a conversation with Robert Creeley, from a short time before he died last year. The interviewer asks him to repeat the definition of truth that he talked about in their workshop. Creeley replies:

“If you look at the etymology of the word, it derives from, in fact, from Druid. The tree is the consistent. That’s where you end up, with the trees, specifically. Not symbolically but literally. And it’s like, knock on wood, that’s probably why you do knock on wood. Because wood is the locating faith. What is felt to be, communally, not just the convention but that to which all agree. So that something like Christ’s, ‘the thruth shall make, set, men free,’ has a curiously, not a duplicitous meaning, if we all agree to this, if we all say the world is this way, that will free us within that imagination. If we don’t, we obviously have religious wars, etcetera, etcetera. So it’s got a double bind there, because the truth is not fixed in stone. The truth is a belief, really.”