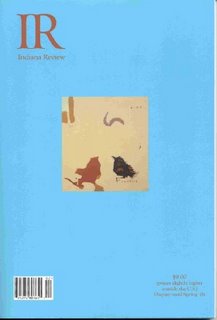 The Indiana Review website says the magazine is in its 28th year of publication, which means, if my math is right, that it began in 1978, which means I was present at the birth. If only I had known! In the summer of 1978 I returned to Bloomington, Indiana and the English Department’s MA program (having completed one semester a couple of years earlier before escaping to Peace Corps service). It’s odd that I wasn’t aware, but I surely wasn’t. I was there in grad school not because I wanted to be a scholar, but because I wanted to write and to write, I figured, I needed to read, and since I hadn’t been an English major in college, a literature degree was what I needed. So the logic went. I vaguely remember that there were creative writing types running around Ballantine Hall, and if I could have looked ahead a quarter of a century I might have tried to be one of them, or at least get to know them. But, no, I was too busy reading.

Despite what the website says, the current issue of IR is 27:2, and I’ve been enjoying it over the last few days.

There’s an interview with Tim O’Brien, which won’t surprise anyone who knows anything about him. He comes across as serious and smart and opinionated, just the way you probably thing great writers should be. In response to a question about whether readers want to learn something from his novels, O’Brien has this to say:

“I think they hope they will, but that hope is frustrated in all my books by my adamant refusal to fulfill that need. In the Lake of the Woods is an example where there is hope that I’m going to solve this mystery for people. My personality is such that I don’t see that as my role. My role is not to solve mysteries, but to expand them. To make them bigger. To ultimately make readers think of their lives in terms of ambiguity. It’s the human condition and we’re uncertain about almost everything.”

Here’s a mystery: when I met O’Brien at the Sewanee Writers’ Conference in the summer of 2004, I had just read his book Northern Lights. And while I hadn’t been as moved by it as, say, Going After Cacciato, I’d enjoyed reading it and so I made the mistake of saying so. I learned that O’Brien hated the book and had tried to get the publisher not to re-release it, which they had done not long before, but had failed. I felt a little foolish for having liked a book the author hated.

There is some terrific fiction in this issue, too, but the one story I wanted to focus on is the lead story, “The Memoirs of Sam Wesson,” by Misty Urban. It is a slightly dark tale of a woman, a country singer, who has taken the name of her absent father as her stage name, and is on the verge of a career break. But she feels something is missing and she decides she’s going to have a baby, and she’s been shopping around for a father.

“And it’s funny, too, how your mind makes things up for you. Like, when I imagine I’m feeding my daughter, she’s in a high chair and I’m sitting at the kind of dining room table my grandma used to have, with round metal legs and a blue-green table top all nicked and scarred from kids, with three-quarter moons of burn marks left from too-hot coffee. And the kitchen I’m in is my grandma’s, with the fat square fridge and the double-sink wash basin with its intestines exposed beneath it, and the crate Gams used to put the scraps in that she’d later carry out to the pigs. . . I don’t know why my mind puts my daughter in that old high chair at that ancient long-gone spotty table with the trees filtering light through the smudgy window outside, but it does.”

This is powerful writing and I’m anxious to read more by Misty Urban although, for me, this story wasn’t completely satisfying because of the ending. I believe I wanted to keep reading.