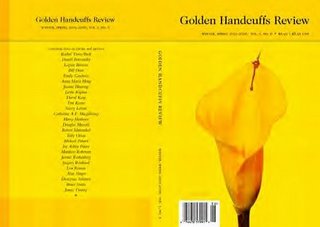 The magazine is distinctive in three ways:

visually, the layout of even the prose pieces is flush-left only; Most (all?) other literary magazines I read are justified; the appearance suggests poetry, and I wonder if that is intentional since a rather lyrical style is favored

editorially, the magazine includes “responses” to some of the poems and stories, something I’ve never seen in a journal, and also includes excerpts from longer works, again not typical

stylistically, I wouldn’t call the work in the magazine experimental, exactly, but it isn’t quite traditional, either, and, as noted, tends toward the lyrical.

The website includes links to several of the pices in this issue, and this excerpt from Joe Ashby Porter’s The Near Future is a good place to start.