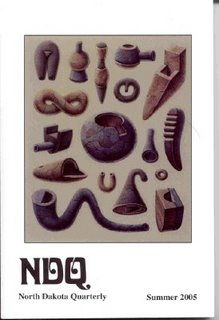 The Summer 2005 issue of North Dakota Quarterly is the “American Indian Issue,” including, mostly, essays about such writers as Louise Erdrich and Thomas McGrath and many reviews of books by or about Native Americans. But the issue also includes a couple of stories by Robert Dawson and poems by Mark B. Hamilton.

From “Surviving April on Lake Sakakawea” by Mark B. Hamilton

“How huge the wind
that dances into rain and ice
bouncing upon the earth its pea-sized hail.

Even the songbirds hesitate.
Turkey calls and smaller, little songs
scatter up the prairie bluffs
hding in last year’s high grass.
Freathers settle amid dry weeds out of sight.

These wicked cold winds
strengthen the wary, yet frighten
all my deep, deaf parts

so I scrunch into the two
dry corners of the tent.

Two days fair, five days foul:
to hide in a nook, a mere hook
of cove, in whatever comfort
remains.”

From “Dogfish’s Gift” by Robert Dawson

“Dogfish gave his promise. The next day he set out towards Lummi and Skagit, planning to raise Wasgo Killer’s stronghold from the sourth, whence no enemies would be expected. However, in the Strait of Whales Applauding, known now as Juan de Fuca, a rogue wave cresting twenty arm-lengths swamped the heavily-laden canoe. Only Dogfish and the white bear were able to swim to shore. The dugout, the paddlers, and the trading goods were all lost.”

Overall, I didn’t enjoy this issue as much as the Shenandoah issue last year devoted to Native American poetry, but I still have a fondness for the magazine because they were the very first to accept a story of mine–for the Fall 2004 issue.