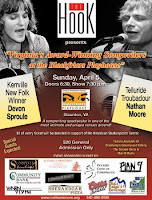 I visited the Blackfriars Playhouse tonight, but not for Shakespeare. Well, it was, in a way, since part of the proceeds of the concert I attended will be contributed to the American Shakespeare Center‘s Invest in Imagination fund drive. So that was great, but the real reason for the show was the music. And the words.

Because songwriters are really poets, and when they’re good songwriters, the poetry can be really good. And this was really good stuff.

First up was Devon Sproule, a young performer from Charlottesville. She has a lovely voice, plays serious guitar, and writes some amazing songs. She did songs from her last album and her next, and I especially liked those on the forthcoming album.

Most people in the audience, though, were there to see Nathan Moore, who is local but developing a national reputation. And while I’ve met Nathan, I’d never seen him perform before. It turns out he’s excellent. Not only are the songs great, but he’s got a really pleasing voice, and he, too, is quite a musician, playing both guitar and harmonica. Tonight’s concert was something of a “rock opera” in that there was a story that the performance was telling. Sort of. It made the concert different, anyway. Nathan was backed by “The Dreams”–three women with beautiful voices, and was helped by some other musicians on bass, fiddle, and harmonica.

A very nice evening of music/poetry.