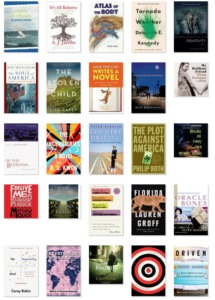 Every year, as a Goodreads user, I set a reading goal for the year. For 2018, my goal was to read 72 books, which sounds ambitious, but that’s 8 fewer books than I logged in 2017. I’ve just barely made it (and 2 of the last bunch of books I finished were chapbooks, so quite short). Still, it’s a lot of books, some of which I liked very much. What follows amounts to my Top Ten for 2018—most NOT published this year, I’m sorry to say.

I read a lot of novels and short story collections, of course. It’s part of the job of being a writer, in my opinion, and I don’t worry much about the work of other writers influencing my own. Some of the best from this year’s reads:

Colson Whitehead’s The Underground Railroad: I got my bookclub to read this one because I’d been wanting to tackle it for some time. I read a couple of other slave narratives this year, but this book’s use of magical realism elevates into something beyond. It still has the elements of horror and brutality, but with an ultimate sense of hope for the future.

Barbara Kingsolver’s The Poisonwood Bible: Obviously I was a little late to the party here, surprising because I am a Kingsolver fan. But I finally got around to it (actually I listened to the audio book) and except for some minor complaints, it knocked my socks off. Here’s what I said on Goodreads: “This is an incredible achievement, and I am sorry it took me this long to get around to reading (it first came out 20 years ago). I’ve read several of Kingsolver’s more recent novels and consider myself a fan. While I admire this novel greatly, I have two complaints. The first is the character–or caricature–of Rachel Price, the oldest of the Price sisters and the one who seems to have been denied a brain and even a sliver of social conscience. She’s both too stupid and too vile to be believed, although I get that she’s meant to represent an element of society that refused to see what was going on under their noses. The second is the novel’s preachiness. Kingsolver is known for her agenda-driven fiction, and I share her political point of view, but the angle here got in the way of the story sometimes (and probably made the book a lot longer than it needed to be). It reminded me that my knowledge of African history and geography is inadequate, however, and I need to remedy that.”

Jessie Chaffee’s Florence in Ecstasy: I moderated a panel at the Virginia Festival of the Book this year that included this book. I loved it and continue to recommend it to others (usually when I hear they’ve been to or will be going to Florence, but I’ve never been there so knowledge of that city is no prerequisite). Here’s what I said on Goodreads: “Starting with the writing, this is a fabulous book. One feels the protagonist’s struggles but also her presence in Florence, a city that she explores in a way casual visitors do not. The language is transporting. But there’s also something about the character of Hannah, her vulnerability, what she sees and notices and cares about, that make the reader root for her. A wonderful read that I’ll remember a long time, I think.” 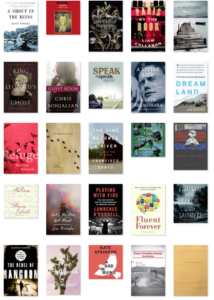 Chris Bohjalian’s The Guest Room: Not only did I get wrapped up in the story, I admired the story-telling structure and, I think, learned from it. Here’s what I had to say about this book on Goodreads: “Maybe 4 and a half stars. My timing with this book wasn’t great. It’s about international sex-trafficking and the horrible book I just finished reading was about domestic child sex-trafficking. I would not have started this novel if I’d known what it was about. Nonetheless, it’s a compelling read for several reasons. First the book begins with big trouble–two deaths are revealed on page 2–and the stakes for the male protagonist just keep getting higher. Second, one has instant sympathy for the sex slave who is at the heart of the trouble. The alternating points of view (with the protagonist’s wife thrown in for good measure) keep the story humming forward. Third, it seems hyper-real. While most of us won’t encounter people like this Russian sex-traffickers, it’s unfortunately not a surprise that they exist, and their tactics are both believable and horrific.”

Janet Peery’s The Exact Nature of Our Wrongs: This is another book I read because I was moderating a panel at the Virginia Festival of the Book that featured the author, and the book went on to win the Library of Virginia’s Literary Award for Fiction. What I enjoyed about the book was the family dynamic, with shifting alliances and stresses pulling in many different directions at once.

In large part because of a book club I’m in, I also read a lot of nonfiction. Some of the best of the year:

Peter Hessler’s Oracle Bones: Hessler, now a regular contributor to The New Yorker, is a terrific writer, and this year I read this book and another book of his about China, Country Driving. (I had previously read his River Town, about his experience as a Peace Corps volunteer in China.) The books combine Hessler’s skill as a journalist with his personal experience as a Chinese-speaking foreigner living in China. Here’s what I had to say on Goodreads: “I thoroughly enjoyed this book. Hessler’s writing is both lively and clear, and in this book, he successfully combines his personal experience (as a former teacher and as a journalist in Beijing) with a somewhat more detached observation of historical events. I found a great deal to relate to here, as well. First, he taught English in a Chinese university, and a couple of decades earlier I taught English, also in the Peace Corps, at a Korean university. Second, while my later work took me to Singapore, I became a student of China and the Chinese language, and I found the information about the oracle bones to be fascinating. (I had, of course, heard about the oracle bones, but the book provides more background on the bones themselves and the researchers who worked with them). Third, while working for the World Bank I also was in China at the time of the NATO bombing of the Chinese embassy in Belgrade, so Hessler’s discussion of the reaction of his contacts in China at that time was interesting. (We were advised to keep a low profile at that time, which we did.) Fourth, Hessler’s friendship with the Uighur man he calls “Polat” also struck me because of the time I spent in the ’90s in Kazakhstan, a country that neighbors on China’s Xinjiang region. Polat, after he moves to the US, ends up living in my old neighborhood just north of Chinatown in DC, yet another detail to which I could relate. I bought this book shortly after it came out in 2006, but I’ve only now taken it off the shelf to read. Better late than never. Terrific book.” 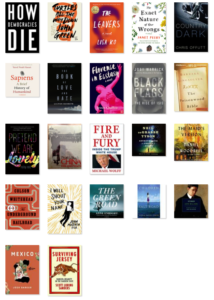 Yuval Noah Harari’s Sapiens: In recent years I’ve been reading about the origins of the species as well as the evolution of language, so I was drawn to this book. Here’s what I said about it on Goodreads: “This is a fascinating and enlightening book, and for the most part is brilliant. Although I’ve read about the origins of homo sapiens and human language, I’ve never thought of it quite as a “cognitive revolution” that separated us from other primates and animals. Still, the early part of the book–the pre-history–is necessarily speculative and is frustrating as a result. Maybe this, maybe that, and if we don’t have any idea then what’s the point of guessing? Similarly, the end of the book attempts to predict the future, with the same speculative and unsatisfying result. In the middle though . . . wow. Great stuff.”

Adam Hochschild’s King Leopold’s Ghost: This was another bookclub selection for this year, and we also included with it a discussion of Kingsolver’s Poisonwood Bible, since both deal with the Congo. The book was shocking, not only because of the atrocities that were committed in Africa in the name of development, but also how woefully uninformed I am about the entire continent. I resolved to read more.

Jon Meacham’s The Soul of America: Like a lot of people, I’m tired of hearing about Trump. I’ve got nothing nice to say about him and the vast majority of my friends feel the same way. His supporters sound ridiculous and misinformed when they defend him. I’m just looking forward to the time when we can start forgetting about him. What I liked about this book was that it is a celebration of moral strength from former political leaders. None of these leaders were perfect, but they worked hard to do the right thing at important moments. While Trump isn’t specifically criticized in the book, his failings are obvious by comparison.

Lawrence O’Donnell’s Playing With Fire: This book is about the 1968 Presidential Election and the events that led up to it. While I knew some of this, there was a lot that I wasn’t aware of. At the time of that election I was a 14-year-old in Peoria, Illinois, and not following current events much. So the detail here was eye-opening.