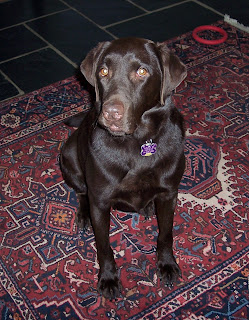 This could be considered a sequel to my AWP Reports, I suppose. I got home from Denver on Sunday afternoon. On Monday morning I picked up Bhikku from the kennel. The folks at the kennel know Bhikku well and they reported, worriedly, that he’d been vomiting and had dark urine. The dark urine was especially troubling and I also observed that when we got home. Nonetheless, I fed him — and later in the evening he threw up. I also noticed that his eyes were jaundiced.

So first thing Tuesday I took him to the vet. They did some tests and took xrays, and while the pictures were inconclusive the blood work showed that his levels of bilirubin were extremely, and worryingly, high. They watched him for a while and then called to recommend that I rush him to a critical care vet clinic down in Richmond (VRCC), 90 miles away. That got me worried, of course. I bundled him into my Jeep and away we went at about 3:30. He was nearly comatose, and those yellow eyes were scary. He coughed every so often and when I didn’t hear anything for a few miles–he was in the “way back” so I couldn’t see him–I feared the worst.

But we got to the clinic at 5pm and after I lifted Bhikku out of the Jeep he walked in, sniffed around, and was led back to the working part of the office where they began to attend to him. It was nearly 8pm when I finally got to speak with a Doctor, who explained what she thought the possibilities were. I’d been fine up to that point, but my exhaustion, my cold, and the reality of what was happening got to me finally, and I could barely speak. But I approved an ultrasound and then returned to the waiting room.

At some point after 9pm, the Doctor showed me the results of the ultrasound, which weren’t conclusive. She recommended surgery, to occur the next day, and I agreed, even though I knew it wasn’t a guaranty of survival. I went back into the kennel area and sat with Bhikku for a while, knowing it might be the last time I saw him alive. The drive home — in the rain — was no fun.

The next morning I got a report before and after the surgery. I learned that a gallstone had been removed, as well as the gall bladder. I was relieved about the stone, because that clearly was what was causing the symptoms we observed, and its removal was important. There were still tests to be run on the gall bladder and liver, but I considered the stone to be good news. That was Wednesday. Each time I called — Wednesday night, Thursday morning and night — the reports were good: he was eating, the bilirubin levels were falling, he was a sweet dog. This morning when I called I learned that he would be discharged today.

So back to Richmond I went, in a far better mood than I’d been in on Tuesday. There was some paperwork to do, the bill to pay, and discharge instructions to review. They handed me a bag of medicine bottles — pain relievers, antibiotics, etc.– and another bottle that contained what looked to be a nut: it was the gallstone they’d removed, about the size of a chickpea. Swell. A souvenir. Finally Bhikku was brought out. He was obviously woozy, but way better than he’d been the last time I saw him, and seemed happy to be taken out to the Jeep for the trip home.

He’s sleeping now. He’s had one bland meal and more meds, and we’ll get test results over the next week or so that could curb my optimism, but for now I’m very happy that he’s home.