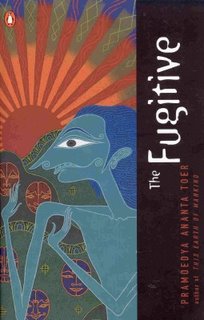 I learned this morning at MoorishGirl.com that Indonesian novelist Pramoedya Ananta Toer has died at the age of 81. Best known for The Buru Quartet, of which I’ve only read the first volume, he’s also the author of the brilliant memoir The Mute’s Soliloquy. His novel The Fugitive was written while he was imprisoned by the Dutch for his role in the Indonesian uprising after WW II:

“In the moonlight the bamboo fence made of tightly woven staves was a glimmering yellow. Beneath the fence and along its edge, weeds and grass, deep green in color, flourished, and in the moonlight the deep green of the grass appeared even darker. The fence wound along the edge of a rice field, bordering a dike that doubled as a footpath. The gate in the fence, also made of staves, was held closed by a twist fashioned from a tassel of bamboo. Behind the fence was a small field of corn, and with the passing of the night wind the stalks rustled and waved. As the wind died, the plants shuddered and fell still, as if asleep, like young men shaken and silenced by dream’s desires.”

Promoedya is a giant in world literature.