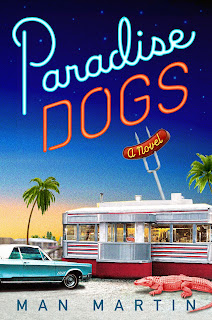 I had the pleasure last night of attending a reading at Over the Moon Bookstore & Artisan Gallery in Crozet, VA, featuring two writers from Atlanta, Man Martin and Jamie Iredell who were in the area for a couple of stops including an appearance tonight in Charlottesville at WriterHouse.

The two writers couldn’t be much different, although they are long-time friends from grad school.

Jamie read bits from two books, The Book of Freaks

and Prose, Poems, A Novel

. They consist of short sections, some admittedly autobiographical, that might be called prose poems or flash fiction.

Then Man “read,” although he didn’t read–he recited. I’ve watched poets do this, but I don’t think I’ve ever seen a novelist do it. He was telling the story of his novel but then he would launch into long memorized passages from his second novel, Paradise Dogs

, the publication date for which happened to be yesterday. Man considers himself a humorist, and that was evident from the story of this book. If you like funny novels, I have a feeling you’ll like this one.

I knew Man a little from the Sewanee Writers Conference, and Jamie recognized my name from a story I’d had in New South a couple of years ago because he used to work on the magazine. And since a bunch of my WriterHouse friends were there, we all went out after the reading for wine and tapas (there’s a nice little place in Crozet that has very good tapas and a decent wine selection, Da Luca Cafe and Wine Bar) and generally had a good time talking about writing and, ahem, other writers.